Roberto in Curaçao and Colombia 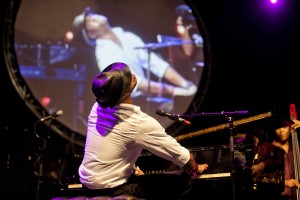 Earlier this month, Roberto performed for the first time in Curaçao and Colombia. The concert at the Dutch Antilles island was part of the North Sea Jazz Festival in Curaçao, and Roberto‘s show at the open air stage in Picadera Bay was packed out.

“yo no sé que será, pídeme lo que tú quieras, mamá,” the crowd shouted during this first concert in Colombia.

It was an emotional show, the pianists’ charms quickly broke the ice with the audience. Fonseca and his band also paid homage to some of Cuba’s great artists, Ibrahim Ferrer and ‘Cachaito’ López.

“I want the audience to enjoy the music and I’d like to change this somewhat aggressive image that Latin jazz has. We want to show that it isn’t all like that, and I’m really happy cause I’m currently discovering lots of influences and I want to continue expressing them,” Roberto explained just before the show.

Fonseca also spoke about his unique percussive style of playing the piano. “When I was 8 years old, I was really interested in the drums, though later, thanks to my parents, I discovered the piano and I realised that on it, I could do it all, that I can play percussion as well, so when I play, I try to compliment the drum’s rhythms,” he explained.

“This genre is going through a lot of changes, there was a time when many groups sounded the same, but now they are started to show other characteristics, and we’re starting to find the music’s essence thanks to the influence of other styles, such as urban music,” Fonseca said.