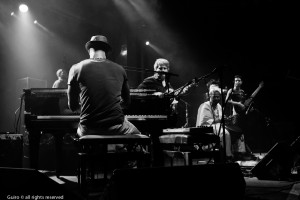 On May 10th, Roberto Fonseca presented his latest work YO for the first time in Spain at the Apolo in Barcelona. Roger Roca said in the Spanish newspaper El Periódico that the rhythms were muscular and Karles Torras from the newspaper La Vanguardia described the show a total sucess. According to the journalist Roberto woke up the audience with a performance that included the past, present and future of music. For those who are in the capital on May 18th, can enjoy the outstanding live show at the Sala Arena Madrid.