Cuban pianist Roberto Fonseca and his all Cuban band were phenomenal 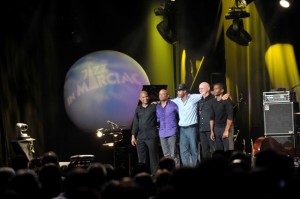 Cuban pianist Roberto Fonseca and his all Cuban band were phenomenal.

Fonseca is a master of the build up to excitement. His style varies between delicate and percussive. His melodies are quite beautiful and each member of the band is a virtuoso of his instrument. The versatility of reedman Javier Zalba was plain to see as he moved from alto to soprano saxes, his beautiful clarinet tone was a pleasure to listen to, and then there was his exotic flute work. Bassist Omar González was tight in the rhythm playing and inventive in his solos. Percussionist Joel Hierrezuelo played a solo on conga drums that was spellbinding and drummer Ramsés Rodriguez was the engine that propelled the whole band. He was amazing, and he had a technique that will leave drummers drooling and the audience on the edge of their seats.

This was a superb debut concert by this new organisation, and a tough one to better.

I wish them only the best and I can’t wait to see what they are going to do in the future.