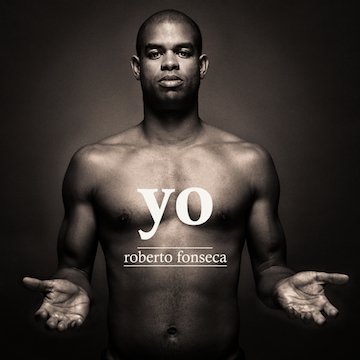 When Roberto Fonseca plays, the music seeps from every pore in his body, at times on stage he stands and hammers the piano as if it were a percussion instrument or he grabs a drum and transforms his group into a comparsa – the Cuban carnival groups that parade the streets once a year – and gets the audiences dancing euphorically…..

YO, Fonseca’s new album, continues this party like never before. Recognized as a major influence on modern Cuban jazz, and jazz in general, he proves that his horizons are not limited by the subtleties of jazz, nor to just the Caribbean.

That he has chosen to title it simply ‘yo’, ‘I’ , or ‘me’ in Spanish, and to pose shirtless on his album cover, his hands open facing up the sky, is not unimportant. The naked torso, without a hat, nor jewellery, evokes rebirth.

“This album unveils the beginning of a new phase more than the closure of an old one,” explains Fonseca. “On YO, I want to delve deep into my roots in light of my experiences and show the diversity of my musical universe, all these ideas which I had put aside, unable to use until now.”

If the new compositions revisit themes such as love and spirituality that have already nourished his work, this time Fonseca draws from a rich musical palette full of contrasts. In place of his usual jazz quintet, on YO he develops a concept of a union between electro, analogue and African, Hammond organs, n’goni, congas, kora and the talking drum, combined together in a synthesis of Afro Cuban groove and Griot tradition.