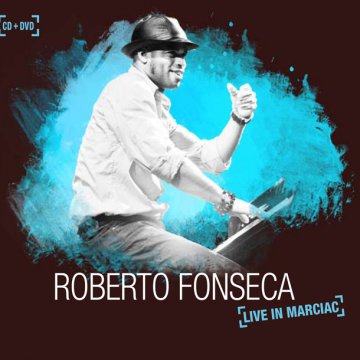 Jazz in Marciac is a festival in the south of France where the music flows between the vineyards and the sunflowers. It is a unique event, where one can enjoy great music under the stars of warm August nights.

The pianist has been perennial favorites in Marciac and Roberto and his band has played a total of fifth times at Marciac, and with his own band, they were invited back for an unprecedented fourth time in August of 2010. Says Fonseca, “each concert i play in Marciac, I prepare with special enthusiasm and respect. The festival and its audience deserve the best than i can offer. I will always be grateful to belong to the great Marciac family”.

To celebrate these special concerts, last year ago Jazz in Marciac decided to launch a collection of Live in Marciac CD-DVDs. The first edition featured Wynton Marsalis & Richard Galliano, followed by Sixun. The third release will be Roberto Fonseca Live in Marciac, recorded during his 2009 show.

With the two previous releases and worldwide tours through Europe, the USA, Canada, Japan and Australia, Roberto Fonseca reached the international stages and is now recognized as one of the most charismatic musicians of the recent years. The album also includes a DVD of the concert.

The live album’s repertoire include tracks from Roberto’s last two album, Zamazu and Akokan, these tracks have been inspired by life and are dedicated to those who have most influenced his musical career. On stage Roberto was joined by the same quartet of musicians who have recorded and toured with him over the past ten years. The DVD clearly shows the dynamic musical dialogue between Roberto and his musicians.