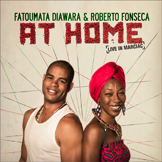 It all began with a shared impression. After their first musical partnership, in 2011 in a Paris studio, they knew that 4 minutes and 32 seconds were not enough. They had to pursue the perfect harmony discovered in the space of a single number. That same year, Roberto Fonseca recorded his new album Yo, due to appear on the Jazz Village label of harmonia mundi. Another highlight for this major jazz piano player, who came to the attention of audiences worldwide when he accompanied Ibrahim Ferrer in 2001.